Watercolor made with a development version of FotoSketcher for Android

Hi all,
The Android version of FotoSketcher is still under development and one of the first effects I have ported is the Painting 9 (watercolor) filter.
The following image was made on my phone in roughly 10 seconds (texture and border where then added with the help of FotoSketcher for Windows). The photo was taken by me in my hometown of Lyon in France (the bridge is the Lafayette bridge on the river Rhône). 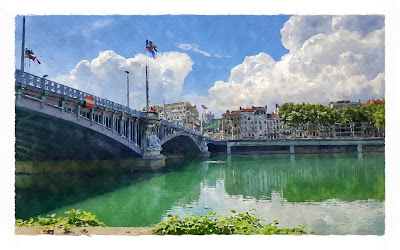 My goal is to have a multi-platform version of FotoSketcher which will run on Windows, MacOS, iOS and Android.
By the way, I have been told that some apps on the Apple, Google or Microsoft stores use the name FotoSketcher. These apps are usually not free and seem to be pretty low quality. In no way are they made by me. Unfortunately, this is blatant plagiarism and parasitism.
The official FotoSketcher homepage will always be: https://www.fotosketcher.com
But enough of that, what's truly important is that you have fun playing with the real FotoSketcher!
Kind regards,
David
Publié par David à l'adresse 3/29/2019 12:06:00 AM

A most beautiful photo and a wonderful effect. Thank you for your creation!
DR
San Diego, CA

Thank you very much :)

When can we expect the android app any time frame

Hi Zakir,
I wish I could give a you a timeframe, but unfortunately I have run into technical problems porting FotoSketcher to Android and other platforms. For those familiar with Embarcadero Delphi, I have to rewrite the whole application from VCL to FMX and there are problems when working with bitmaps in multi-threaded environments. This is frustrating but necessary as an Android app will become unresponsive if not coded properly. I am at a point when I have tried many strategies, but may well have to start all over again... So don't hold your breath, it will take time.