FotoSketcher for Mac - proof of concept

It's been a rather long time since I last updated this blog and I apologize to all my faithful followers. I know that you can't wait to know what's coming in the next release of FotoSketcher ;-)

First of all, I've busy rewriting the official website (http://www.fotosketcher.com/) which was in serious need of an overhaul. To cut a rather long story short, I installed and learned Wordpress, chose a nice, clean looking theme and voila!

Then, after some severe lobbying from Mac users ;-), I decided that I would start looking into Mac development. Fortunately, my programming environment Delphi had just been updated to support Mac OS. So I decided to invest in the latest version (Embarcadero Delphi XE2), purchased a (not so) cheap old Mac Mini with 512MB of RAM and tried to start programming for the Mac. Alas, I soon discovered that I needed to upgrade to Snow Leopard (the minimum for Delphi XE2) and that requires 2GB of RAM!

So, following this great tutorial http://www.methodshop.com/gadgets/tutorials/macmini-ram/index.shtml and miraculously not screwing things up, I finally installed Mac OS X Snow Leopard.

And tonight I set up everything to try compiling a test program on my Mac. It actually worked the first time (I nearly fell off my chair)!! Here is proof of my first program running on a Mac: 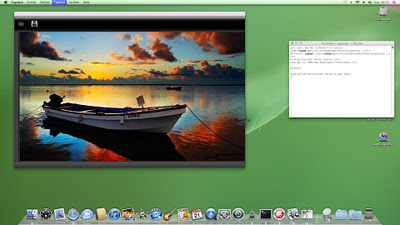 The snag is that in order to make FotoSketcher multi-platform, I will need to rewrite the user interface and probably quite a lot of the "under the hood"code. So I'll probably continue updating the current Windows only version in parallel for a while.